The wit of Oscar Wilde
meets the cunning of
Sir Arthur Conan Doyle
when Wilde brings his
dear friend, Lillie Langtry,
to Baker Street.
Someone ​has stolen the
highly intimate letters
Lillie exchanged with
​the Prince of Wales, and now she is being blackmailed. Only Holmes can solve the case, going so far as to disguise himself as an early version of Lady Bracknell from Wilde’s latest play, The Importance of Being Forthright, while Watson falls head-over-heels for the Jersey Lily and a wicked professor attempts to bring the Crown to its knees.

sherlock holmes and the case of the jersey lily 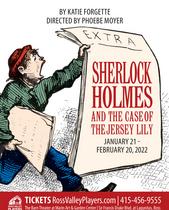 It's a word we'd all like to never hear again, I'm sure: "Unprecedented". The times have been unlike any other we've experienced in our lifetime, and we're still not totally clear of the ripples set in the water by the global pandemic: COVID-19.
Here's another word I'm tired of hearing: "Pivot". Businesses, academic environments, essential retailers--indeed, every single aspect of life--had to quickly shift to continue doing what we needed to get done, but in different ways. Practically overnight, a relatively obscure video conferencing app called Zoom became a household word.

Within weeks of the shutdown, I was contacted by a director I'd worked with in the past. He had the idea to continue doing theatre--but via Zoom. We thought, when we began it, that it would be a hybrid of theatre and camera work. We were correct--in the way the tiny tip of ice showing above the ocean surface is an iceberg.

After trying to figure out which lighting, camera, and audio equipment to get, we delved into virtual backgrounds that could represent a set. We costumed ourselves, made our own props, became our own directors of photography. We embraced failure--every rehearsal, we strove to "break it": find what didn't work, and try to adapt to what did work in that environment. It was grueling and exhausting--performing live via stream was unlike anything I've ever done before or since, and worked a completely different set of muscles. But it was also incredibly rewarding. I was able to work with people I would not have had the opportunity to otherwise work with because of geography. We came up with clever magic tricks to break down the flattening that environment brought to our performances. We were innovating and improvising How To tell stories in this new form--and it felt like the folks must've felt in the early days of musical theatre, or talking film. We were scoffed at, and our productions were not regarded as "real" theatre. Perhaps they weren't--but while we all operated under the hope that everything would return to normal in a few weeks, we wanted to prepare for the reality that it might not. We were pioneering something special, and we knew it.

Several weeks after that first production, other theatres began to join in. The next play I was scheduled to perform live took a stab at performing via Zoom: more learning, more trial and error, more innovation. The following production I took part in was as the fight choreographer--we shot the fight as a mini-film, safely, and then the stage manager "shared screen" and played the movie at the appropriate time during the live action. In another show, we put two actors in the same household on the set, and streamed in two other actors at two remote locations, with still photos of the set as their virtual background. I participated in a short festival of plays written to take place in the streaming environment--another first, this time with appropriate material for that world.
Then, things began to open up, and a show I was already scheduled to perform via Zoom was the first to be performed with actual audience members in the house again after more than a year hiatus. Entertainment writers for local media asked how it was to "return to theatre". I never left. It was different, but it was still telling stories, engaging audiences in different ways, and challenging myself to do more and do it differently. Just like always.
I am glad we are able to perform with real people in the audience again. But I will never forget the lessons learned, nor will I ever be ashamed of "looking bad" or making mistakes along the way. I will forever be grateful for the opportunity to work with such amazing, brave, innovative folks, and feel richer for the experience.

Thanks, as always, for your support of live theatre. In whatever shape it comes.